Nick Gizzi, a former BTEC Level 3 Music student, now enjoys his dream career in the music industry after Burnley College gave him the vital qualifications and knowledge he needed. Read of Nick’s journey to success – in his own words – below.

Hi I’m Nick Gizzi a professional Front of House and Recording Engineer based in Lancashire.
I work for a number of different artists including Working Mens Club, The Sherlocks and The Drifters. Most recently I have been fortunate enough to do the live television sound mix for Working Mens Club on the BBC2 show ‘Later with Jools Holland’ which was a true bucket list achievement for myself and the artist.
I started my musical journey here at Burnley College where I studied on the BTEC music course headed and taught by Karl Eden and co.

It was a fantastic course which helped solidify my decision to pursue the technical aspect of the music industry opposed to a more performance-based career path.

The Tutors at Burnley College really helped to facilitate my interests by tailoring assessments and extra-curricular activities to allow myself and my fellow students to experiment within the different career options within the music industry and without this encouragement and nurturing I definitely would not be doing the job I do now.
The college has great facilities, and the Tutors are supportive, even the studio tech Andrew – without his guidance I would never have been able to grasp the many different aspects of audio engineering. 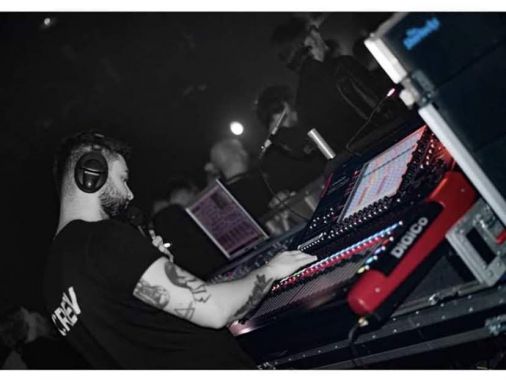 After leaving Burnley College I went on to study a BSc in Sound Engineering and Production at Birmingham City University which is also a fantastic course and very well equipped to take the teaching to the industry standard. It was whilst studying at Birmingham University that I started shadowing engineers in local music venues in my spare time until eventually I was offered a job as an in-house engineer in numerous venues.
Once I graduated, I continued working in numerous venues as a freelance sound engineer whilst also undertaking my PGCE, where I went on to teach Music Technology at Oldham College full time. I taught for three years whilst still working freelance as a sound engineer in my spare time until I was fortunately picked up by The Sherlocks to become their personal touring front of house sound engineer.

Through touring and mixing The Sherlocks, I was also picked up by Working Mens Club and have toured with them alongside The Sherlocks for two years, we have done numerous UK, European and even world tours over the past couple of years which have been an amazing experience.

Until Covid! Unfortunately, in 2020 due to the Coronavirus outbreak live music has been halted (the first to go and the last to return), I have been unable to tour due to restrictions and the risk of infection therefore myself and the artists have had to adapt our trade to suit live streaming and TV.
I have undertaken numerous live stream concerts where the audience logs into an online platform to view the show on their smart devices from the safety and comfort of their own homes, this shift in the architecture of live performances has meant changing live mixing practices to more of a broadcast and recording engineer, which has been great fun and I am just happy to be able to continue doing what I love.

The training that I received at Burnley College and Birmingham City was paramount in giving me the skills to be able to adapt my trade.

The numerous different modules at college helped to cover almost all bases and the knowledge that I learnt about 10 years ago at Burnley College, I still use every day as a working professional.
I will always be grateful to Burnley College and all my Tutors for giving me the best head start and guiding me to achieve my goals to work in an industry I am truly passionate about and love.

Nick was always an enthusiastic and motivated student with lots of musical projects alongside his studies. We’re very proud of his achievements so far and feel he’s only going to continue on this upward trajectory!